For each movie in the “Denis 2049” series, Taylor and Sam will sit down and bounce some thoughts off each other, off-mic. Their brilliant minds will unleash many words. Make of them what you will. This time: “Maelstrom.”

Sam: I speak French just fine, but remember, Taylor, this movie is French-Canadian. And in that field I can only speculate.

Taylor: The talking fish is the only thing I cared about, and possibly the only thing I’ve ever cared about. You know those movies where a guy or girl falls in love with someone who speaks another language or something? Where they find themselves inexplicably attracted to the other person, simply by their very nature? That’s how I felt about this fish.

Wait – I don’t mean I was in love with the fish. I just mean, I was obsessed with trying to figure out what he was saying. It was captivating! Look at this thing! (NSFW?) 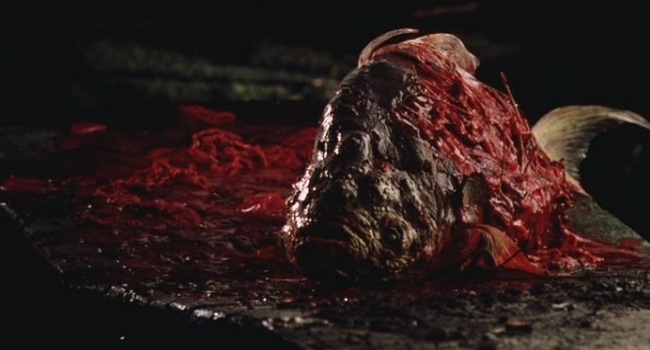 I can only guess what the fish spoke to us about in his role as the Grand Narrator of our lives because French-Canadian is a dead language, but if I had to guess, I would have figured the movie was going in this direction:

Fish: Hello there. You at home. You sick voyeur. I have a story for you. One of tragedy, thoughtlessness and incessant violence against an entire race. A tale of a careless woman aimlessly wandering around murdering fish. I myself was torn from my underwater home to tell you this story. I have a son who I will probably never see again. In fact, I’m really struggling to breath on this table because fish are meant to be underwater. If you didn’t know. Before it’s too late, let me tell you some of the things you are going to see tonight. Fish will be killed. Some will be sliced up. Some will be skinned. Some will be run over by cars. Some will be slowly torn apart as people stand around drinking alcohol. Some will even suffer the worst, most unexpected fate for a fish – a car plunging into the water and killing you on impact as you go about your night. One of my good friends, Go, was out for the first time since his divorce, trying to get back into the world, when that car came falling into the water. Dozens of lives were lost. It’s not a story I want to tell, but it’s one that must be told. I call it —

Sam: Taylor, you really painted Grand Narrator in a light that is both tragic and compelling. Fish have come a long way as storytellers.

I admit, I had a different translation of the fish’s narration:

Fish: AAHHHHHHHH AHHHH! AHHHHH HELP! AHHHHHHHHHHHHHH AAAHHHH! MY GILLS ARE ON FIRE THIS IS MISERY!!! AHHHH!

I will say that once I found out this movie was not in fact a documentary about the phasing-out of the Epcot ride, “Maelstrom: A High Seas Norwegian Adventure,” I checked out. Despite that, I do want to submit to you a potentially unique take I had about this movie: It was boring! It was super boring! It was slow and brooding in a way that took itself too seriously, and I just didn’t love it. I expected more from Dilleneuve, who by this point had made a name for himself in the ‘odd movies about women ditching their cars’ genre.

Disclaimer: Once again, I do not speak the language “Maelstrom” was presented in.

Taylor: And with that, I suppose Sam has also checked out of this conversation.

I guess that’s fair, given how indecipherable most of this movie was. I just want to say that this movie deserves a re-release in HD with English subtitles, so we can truly judge it on its own merits. The American people deserve everyone catering to our every desire.

Actually, scratch that. I want more. I want this movie remade entirely. I don’t care who the director is, either. I want an English version of this movie where the talking fish is replaced with a talking Big Mac. Instead of being about the endless, ongoing genocide of fish, it’s a commentary on what fast food has done to the world and how we interact with it without even knowing. The lead is Alicia Vikander (obviously).

That’s it. It shouldn’t take anything more to sell the movie to a studio. Show them the talking Big Mac animation and Alicia Vikander in anything (except “Jason Bourne,” don’t ever let anyone see “Jason Bourne” for any reason), and you’ve got yourself at least a billion dollars in funding.

Get to it, Megan Ellison.